WNC Aviation, LLC, is owned by River Rock Holdings, LLC, a family owned company that focuses on business development opportunities in a variety of areas. The core focus of River Rock is within the aviation industry. In addition to our flight training expertise, we have experience in FBO operations, aircraft sales and aircraft maintenance. Currently, River Rock companies include WNC Aviation, Stokes Aircraft Service and Belle Aircraft Maintenance. 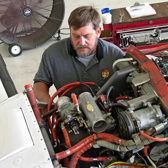 Mike Everhart brings to the Belle Aircraft Maintenance team nearly thirty years of maintenance experience. In 1981, during his enlistment in the U.S. Navy as a power plant mechanic, he gained experience on radial, turboprop, turbine and helicopters. After the service, Mike moved into the general aviation field. He spent the next 24 years at the Orlando Executive Airport in Central Florida, before relocating with his family to Asheville, NC in 2010. During his long tenor in Florida, Mike obtained his certifications in Airframe & Powerplant and Inspection Authorization.

Bringing a thorough understanding of aircraft maintenance procedures, aviation standards and FAA regulations to his work, Mike takes pride in providing a very strong commitment and loyalty to the customers who entrust him with their safety.

Patrick is a certified Airframe & Powerplant Mechanic and is a graduate of Embry Riddle. He has significant experience in electric systems troubleshooting and diagnostics as well as avionics.